Heaven 17/B.E.F.: Electronica at the Roundhouse

British Electronic Foundation 30 year celebration, live at the Roundhouse in London. Live visuals and merchandising design for a 2 night show. Having previously created a number of live visuals for Heaven 17's 30th anniversary tour of the album Penthouse & Pavement, I was then asked to create the live visuals for this weekend.

The screens used are very low resolution LED strips, which up close are just vertical glass tubes with evenly spaced LED lights, this means that anything with fine detail could be lost, however, proved very effective with graphic images, viewed from the audience's p.o.v.
B.E.F. Roundhouse visuals
Penthouse & Pavement backing visuals

Crushed by the wheels of industry - poster design echoing the indsutrial landscape of the bands hometown in Sheffield, premier was held at Magma - formerly an insdutrial steel works.

Close up of the low resolution'screens' 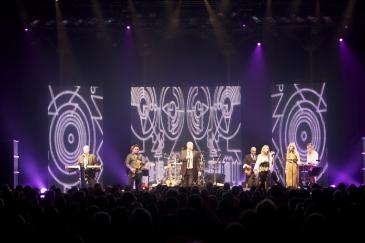